I got asked about my email list open rate today. And then, I ran across this, from Andy Matuschak, and I wanted to share it because it’s a nicely-written expression of an idea that influences how I use email:

One surprise of crowdfunding research has been the pleasure of building a closer relationship with a community of people enthusiastic about my ideas. But to do good work, I mostly need to avoid thinking about funding and funders. The promise of ongoing exclusive content creates some tension, then. Unlike a typical paid newsletter or blog, funder-exclusive writing is a secondary by-product of my primary work. In this way, I’m not a traditional “content creator.” Sometimes I catch myself thinking in terms of what I’ll write or report next to my funders. That’s not good. Such a mindset, taken too seriously, encourages shallower work designed to appease others. Also, I’m human, so I naturally want to report successes. But this can create the same pressures which exist in scientific publishing: short-term-ism, conservatism, publication bias, harmful over-claiming. In research, it’s terribly important that you be brutally honest with yourself. I don’t think it’s possible to craft marketing-like messages about your “great progress” without closing your own eyes to what’s actually happening—which means you’d better be brutally honest when talking to others about your work. As an antidote, I’ve tried to engage in what Michael has called “anti-marketing”. That is, to make a point of focusing publicly on the least rosy parts of my projects—what’s confusing, what’s frustrating, what’s not working. It’s hard to do consistently, but when anti-marketing is the goal, then interesting challenges become something positive: useful fodder for public conversation, rather than something to be swept under the rug. I suspect it also builds a deeper, more authentic relationship with an audience.

Source: https://andymatuschak.org/2020/ I express this idea visually. Here’s what you can do with marketing: 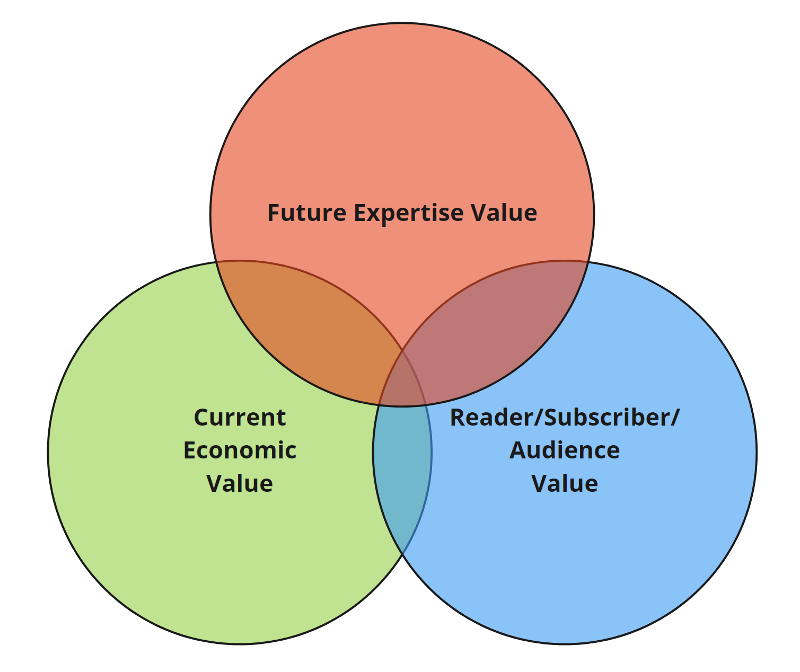 You can create 3 forms of value (4, if you consider brand value separate from the other 3 shown here). Some of these forms of value creation are co-dependent. If you’re using an email list to earn visibility and trust, then it’s difficult to create current economic value for your business without engaging in at least a little reader value creation. This is the idea that underlies content marketing: create some value for an audience, get some sales from that audience. Direct response marketing looks like this: 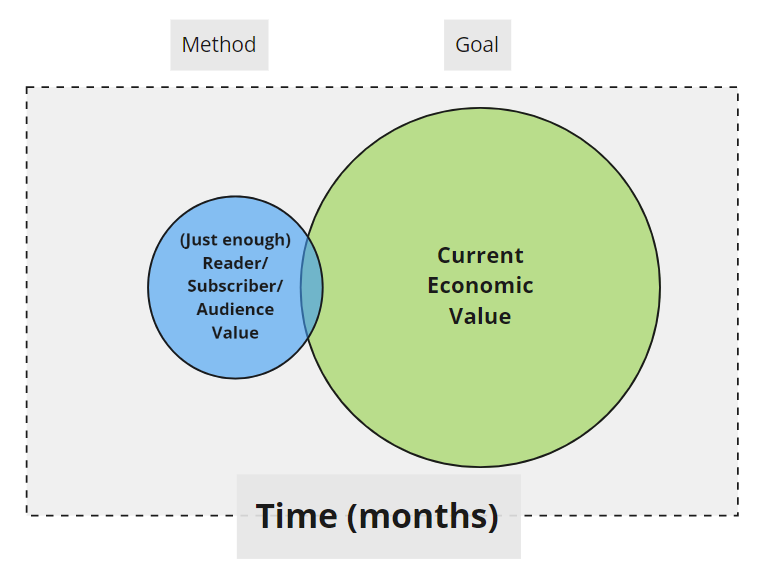 Most subscribers to an email list (I was going to say a marketing list, but even news/media is leaning this way now) expect some form of the deal described above. What I’m doing with my email list is a reconfiguration of the direct response marketing deal:

With this approach, I sacrifice both current economic value and subscriber value on the alter of something I value more: future value creation. My email list open and unsubscribe rate reflects this. Could I strike a different balance? Sure! Lots of things can work. Will this approach produce better results than one that more heavily favors current economic value creation? I don’t know for sure. You could argue that an early-stage expert should focus on maximizing the opportunities to apply the expertise they have and let the growth and deepening of that expertise come from challenging client work rather than from repurposing an email list as a thinking-and-learning-in-public tool. I don’t like the slow pace of this approach, but you could argue it would produce better long-term results. Anyway, this particular passage from Andy Matuschak’s article is particularly resonant for me:

Sometimes I catch myself thinking in terms of what I’ll write or report next to my funders. That’s not good. Such a mindset, taken too seriously, encourages shallower work designed to appease others.

I’d adapt it to those who attempt to create just enough subscriber value to maximize current economic value: to what extent is this encouraging shallower work designed to appease others?

My email list open rate is around 25%, by the way, for my daily emails. It’s higher for email courses where the list member is new and hasn’t wized up to how frequently and lenghtily I email. :) For an email course that’s been up and running for a while, it’s more like an average of 60% (screenshot: https://i.imgur.com/fdpmQip.png)